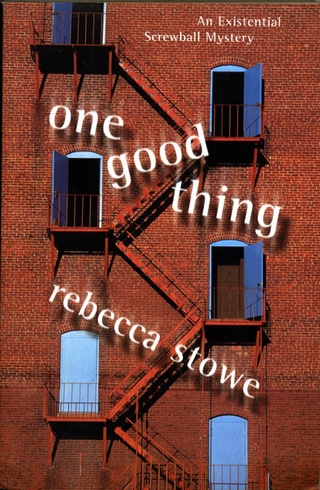 Everything was falling apart. The world, the economy, his apartment building. The entire city was crumbling to pieces in big noisy chunks. The only that wasn’t falling apart, Harry Butler thought happily, was himself.

It was Harry’s forty-seventh birthday. He refused to consider forty-seven the beginning of middle age, even though it was, mathmatically, probably more than middle. It was unlikely he’d live to see ninety-four, but still, middle age was the beginning of old and old was something Harry Butler would never be. He’d had a premonition; a feeling he’d had since he was a teenager, that he’d die dramatically and young. He had a vision of himself burning out in a blaze of blue light, living his life so intensely and fast that the sheer momentum would hurl him to an early, tragic, and much-poeticised death. Spontaneous combustion. The only way to go. Anything else was settling for the ordinary and ordinary was something Harry Butler was not.

He jumped out of bed and began running in place. In the human life span, he thought, there are only two phases. Youth and Old Age. Since he refused to be old, he must still be young. What was age but a bunch of numbers, anyway? You’re only as old as you feel, they say, and he felt twenty, fifteen, as happy and energetic as a ten-year-old playing hooky.

He whooped a Tarzan King of the Jungle wail and pounded his tight belly. “Go ahead,” he told himself, “hurt me.”

A rock, he thought gleefully, steel. This is not the body of an old man, this is the body of a god. Middle age is aches. Pains. It’s arthritis and all that shit. I never get sick, he thought, I’m in better shape than Cher.

He thought about Cher for a minute, closing his eyes and seeing her dressed in tight black spandex, sequins glittering like sweat. He watched her slither across a lighted stage, like a charmed snake. If she could see me, he thought, she’d love me.

That would be something. He’d dump his flabby wife and go live in Cher’s California mansion. They would work out together and then screw. She would support him – she had plenty of money, she was a Super Star, she wouldn’t mind. She had supported that bagel guy, why not Harry Butler, starving artist?

Clark had left him half a grapefruit and a rose. HAPPY BIRTHDAY she had scrawled in red lipstick across the cover of the Daily News.

Harry grinned. He would never dump Clark, not even for Cher. She wasn’t a goddess, but she did support him, and while no one could accuse her of doing it in style, she did it in her own way and that was good enough for Harry Butler.

He looked around their apartment. “Squalid,” his middle-class Midwestern mother would call it, if she saw it, which she wouldn’t. Downscale, definitely, but rent-controlled. Clark had been living there since the beginning of time, practically, and even though she made a hefty salary now, she wouldn’t dream of leaving. For one hundred and sixty-two dollars a month they got two small rooms, with a hole cut out between the kitchen and the living room. One whole wall of books. The rest of the walls were covered with papier-mache masks from Clark’s performance art days: leering, bird-like faces covered with feathers and glitter, cheerfully grotesque. Nary a closet, although Harry had built, with his own hands, a kind of alcove where they kept their clothes in plastic milk crates and shopping bags.

Some people might call this a dump, he thought.

And they’d be right.

He laughed aloud at his own joke and thought about how good it was to be alive, to be healthy, to be happy enough to laugh at something someone else might cry about, like living in a dumpy two-room bathtub-in-kitchen tenement apartment. Like living at all.

“Kerouac died when he was forty-seven,” Clark reminded him last night, but Kerouac had been a drunk. A fat, out-of-shape, raving nutcase drunk and Harry was, well, Harry. Kerouac had squandered his talent, belching it out at every two-bit bar he stumbled into, but Harry was holding on to his. He clung to it, savoring it, keeping it to himself as long as possible. He wasn’t going to end up at the bar of some Blarney Rock, eyeing the door for some bum he could rope in and pummel with his tales of glory. Not he. Not Harry Butler. He had a masterpiece in him: he knew it, Clark knew it, everyone knew it. Parts of it had been circulating in the East Village for years. He had three publishers waiting for it. That made him a legend, of sorts. While everyone else was scrambling, begging, pleading, tooting their own horns in an endless horrisonous bleat, Harry just sat back and wrote. While everyone else was pissed off and depressed, Harry was happy.

He didn’t understand depression, but he was working on it. Not for himself – he had never been depressed a minute in his life and he had no intention of starting now – but he needed to get inside it. It was the malaise of the late twentieth century and how could he leave behind a lasting testament of his life without reflecting the world around him? And the world around him was depressed.

That was as far as he’d gotten. Harry was a multi-talented sort of guy – in addition to his book, he was developing a new kind of music, combining elements of rap with Gregorian chant. Raptor Music. Brutal. Assaultive. Scavenging. Picking the bones of a decaying society. And above all, depressed.

It was hard for him to get the depressed part. Just thinking about Raptor Music elated him – he felt powerful, strong, eagle-like, King of the Sky soaring above a city full of potential meals and it was hard to get depressed about that…